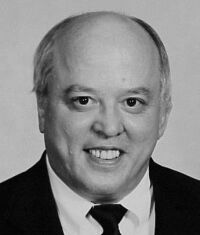 “He’s got a great legacy and he’s done a world of good to help sport get to where it is today,” said George Arcand, president of Sport Yukon.

The sport world has lost a good one. Last week, Gerry Thick passed away at the age of 77.

Thick moved to the Yukon in 1966 and quickly got involved in the sport community, said Arcand who met Thick in 1969 at the ballpark.

“Gerry was a major supporter of all sports,” said Arcand.

Thick was the manager of Northland Beverages for 46 years, a position, said Arcand, that allowed him to help many people.

“Through Northland Beverages, it made it easy for him to be able to support all takers of sports and arts,” said Arcand.

“He was the kind of guy who was open to any idea. You sell it to him and he’d ask you a whole bunch of questions, call you a bunch of names, then help you out.”

Thick served two terms as a Whitehorse city councillor (1986-1991), but it’s his involvement in the territory’s sport community that he’s best known for.

He served on the Arctic Winter Games’ International  Committee for 29 years. In 1995 he became president – a position he held until 2014.

Thick is also well known for his impact on Yukon softball. He was the first player/coach on the first men’s softball team from the Yukon to win a silver medal at the Western Canadian Softball Championships and was honoured as Yukon Coach of the Year in 1984.

Not to be forgotten, said Arcand, was that “Gerry was a heck of a hockey player.”

Thick’s passion in hockey saw him organize the Yukon’s first senior AAA hockey team and he worked diligently to fill the arena on many cold winter nights in Whitehorse.

For his accomplishments in sport, Thick was named to the Sport Yukon Hall of Fame in 1996.

Thick had a long-standing relationship with Sport Yukon, even serving on its board in the 80s.

He was a “big proponent for the Kids Recreation Fund,” said Arcand. “Even when he wasn’t on the board he’d ask about it.

“It was his passion that kind of thing,” said Arcand. “He wanted to make sure kids got the help they needed.”

In lieu of flowers, Thick’s family is asking for donations to be made to the Kids Recreation Fund, so families experiencing financial hardships can get their children involved in sport and recreation.

“I’m going to miss him,” said Arcand. “Lots of people will. He was a friend to lots of people.”

Sport Yukon caught up with Dahria Beatty after completing her second Olympics.

It was another banner year for Yukon athletes making it to the varsity level. In 2021, 15 athletes…