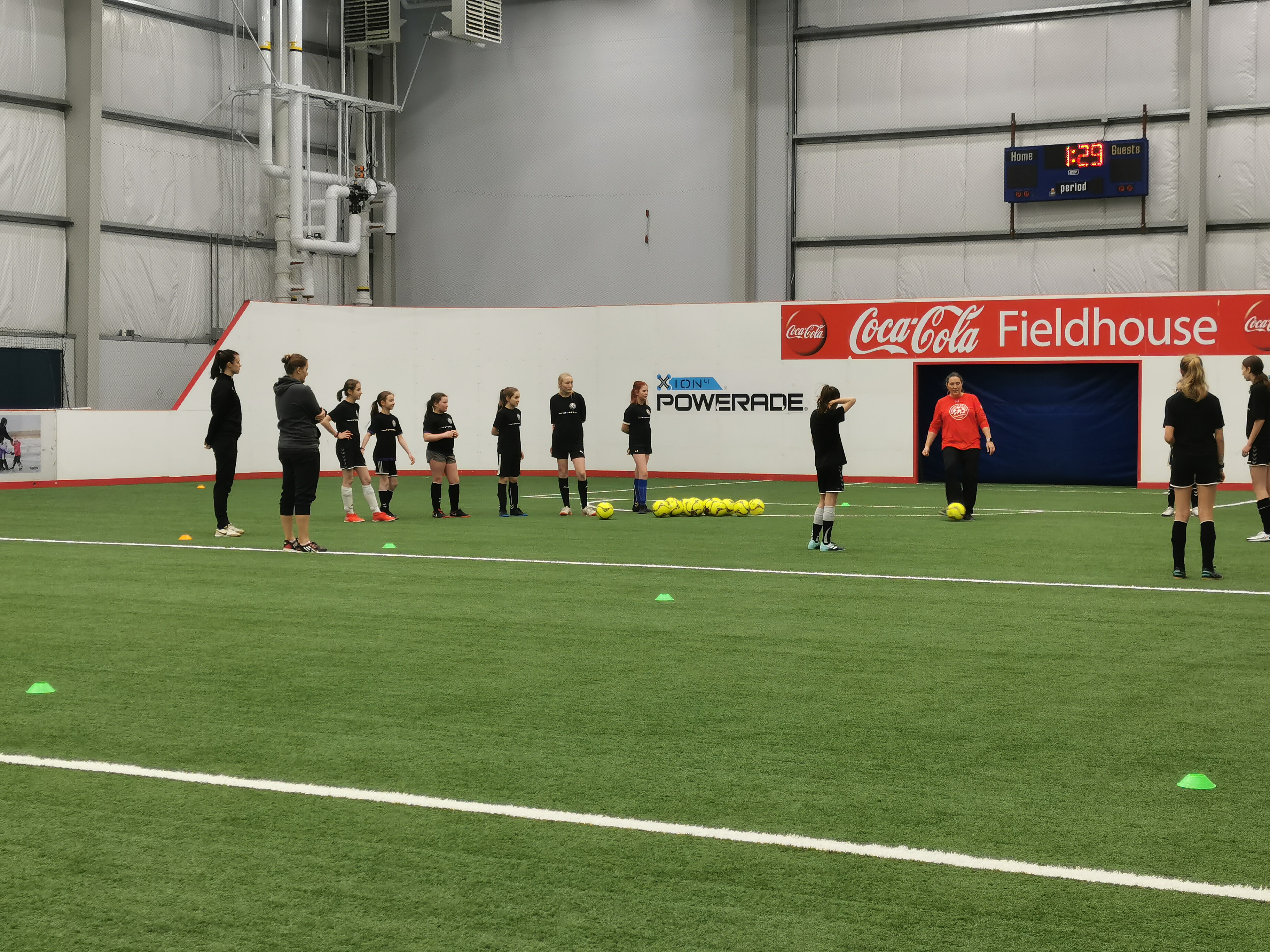 The Whitehorse United Football Club introduced a “new and exciting” opportunity for girls born between 2004-2011 this winter ending in early February. The program was dubbed Futures.

Amy Vermeulen, a head coach for the Futures Program, said it was created on the assumption that more programs “offered teenage girls, especially through sport, will help them with their mental health and help keep them engaged in any type of participation, not necessarily soccer.”

“Trying to come up with something to offer these girls at this age group was the goal and I think having one day a week where we all have an all-female program, coached by females, it makes a pretty big difference,” said Vermeulen.

The Futures Program had 21 girls register aged 10-14. Vermeulen said from the start of the program to the end participation remained steady, making it a success.

By joining the Futures Program, girls are signing up to be a part of something larger, said Vermeulen.

“We want them to have confidence,” said Vermeulen. “That something larger is the idea that it’s bigger than soccer. It’s about becoming competent females in this world and sport being a vehicle to that.”

“I really liked it and I want to do it again and again,” said Johanson. “I get to meet more girls every time and it makes girls more confident so they feel like they can do more things.”

For Johanson, being part of an all-girls program run by female coaches was important to her.

“It shows me that the coaches never give up,” said Johanson. “They tried their hardest and got to where the boys are and that proves to the boys that girls can do the same thing.”

“It was really comforting, it didn’t feel like there was high expectations for any of it and you could just do your best,” said Smith. “We learned at Futures that girls tend to drop out of sports at age 10-13 because they don’t have enough confidence to keep playing.

“This was really nice because it made you confident.”

Smith said when she takes the pitch with the boys it feels like more pressure so it was nice to play in an all-girls environment.

“The girls were really nice and wanted to be there,” said Smith. “It felt like a safe environment.”

For Charlotte Smith, it was getting to be around the older girls that made Futures so rewarding.

“I really liked doing it, especially with the older girls,” said Charlotte. “I feel like I improved my soccer skills.”

Being around the older girls, Charlotte said, gave her people she could look up to.

Aria Murray said the first few weeks were slow, but Futures picked up into a program she enjoyed – especially when it came to raising her confidence.

“We talked a lot about confidence which I think is really great,” said Murray. “A lot of young girls struggle with confidence issues. It really helps girls to have a safe space and Futures was really good for young girls in developing and making them feel better about themselves.”

Being in an all-girls environment is something Murray appreciated.

“I like playing soccer around lots of women,” said Murray. “It’s just a really great opportunity to share our skills and look at things a different way.”

The Futures Program also featured Game On – an E-module for coaches and activity leaders that addresses how to create safe and respectful environments for girls to participate in sport.

“We incorporated it into the program,” said Vermeulen. “There was journaling and discussions and conversations and different modules to help eliminate barriers in participation.”

Vermeulen said she isn’t sure how the girls took to Game On but the coaches thought the program was really cool.

Johanson thought the Game On modules were helpful for future planning.

“I like how each goal we put in the journal,” said Johanson. “We’d write in our journal and then talk about how we could do better and achieve more goals.”

Madeleine enjoyed the letters to her future self.

Charlotte said it helped her get a clear image of what she wants to do in the future.

“I want to play soccer in university,” said Charlotte. “It’s a very fun sport and I hope I can stay in it.”

Murray enjoyed Game On because it was something she’d never experienced before.

“It makes it (soccer) a lot more fun and it makes you want to do soccer more,” said Murray. “I think it was a really great way to make people want to play soccer more.”

All the participants said they can’t wait for the Futures Program to get rolling again in the fall.

With the success of the first rendition of the program, Vermulean said hopefully the success can translate into the future.

Arrows fly at two Outside competitions

Two groups of archers went to competitions in P.E.I and B.C.

The YT Elites volleyball team earned silver at BC Provincials.